Meet Francesca Reale, one of the refreshing most recent additions to the cast of Stranger Things. Born and raised in Los Angeles, the 25-year-old actress was introduced in the third season of Netflix’s worldwide phenomenon which premiered last July 4th. Known as Heather, a lifeguard at the Hawkins Community Pool, she became the centerpiece of a dark mystery taking place in summer 1985 in the fictional town of Indiana, where things are not as simple as they sometimes appear to be. Throughout our phone conversation, we perceived Francesca’s bubbly personality as she reflected on the rollercoaster of emotions she has been through up until then. 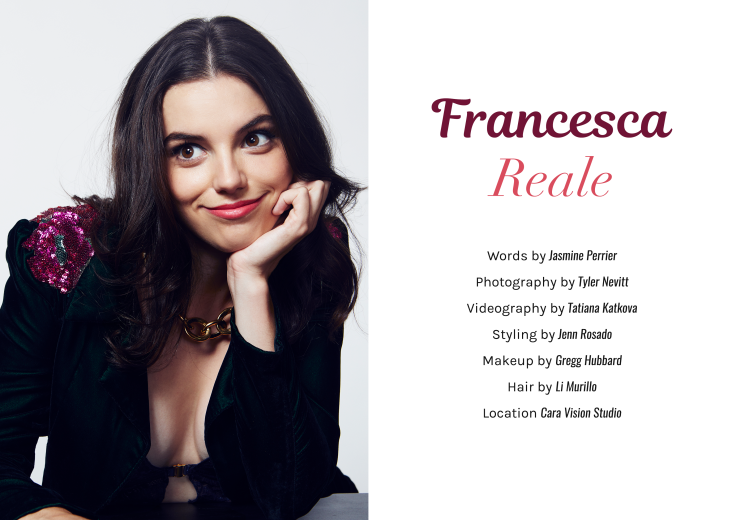 ‘‘It’s an incredible show so I was going to be attracted to any role they were offering because I trusted that team to make something incredible out of it,’’ Francesca starts. Since Stranger Things landed on Netflix in July 2016, millions of people across the globe have showed a strong interest in the science fiction-horror series created by the Duffer Brothers and the intriguing universe built around it. ‘‘It’s such a huge phenomenon so I was a little bit nervous about what if I didn’t fit in with the cast, what if I didn’t fit in with the dynamic. Then they also have such a huge fanbase worldwide of people of all ages, so the last thing I wanted to do was to introduce a new character to the world that the fanbase didn’t like because they are so invested.’’ 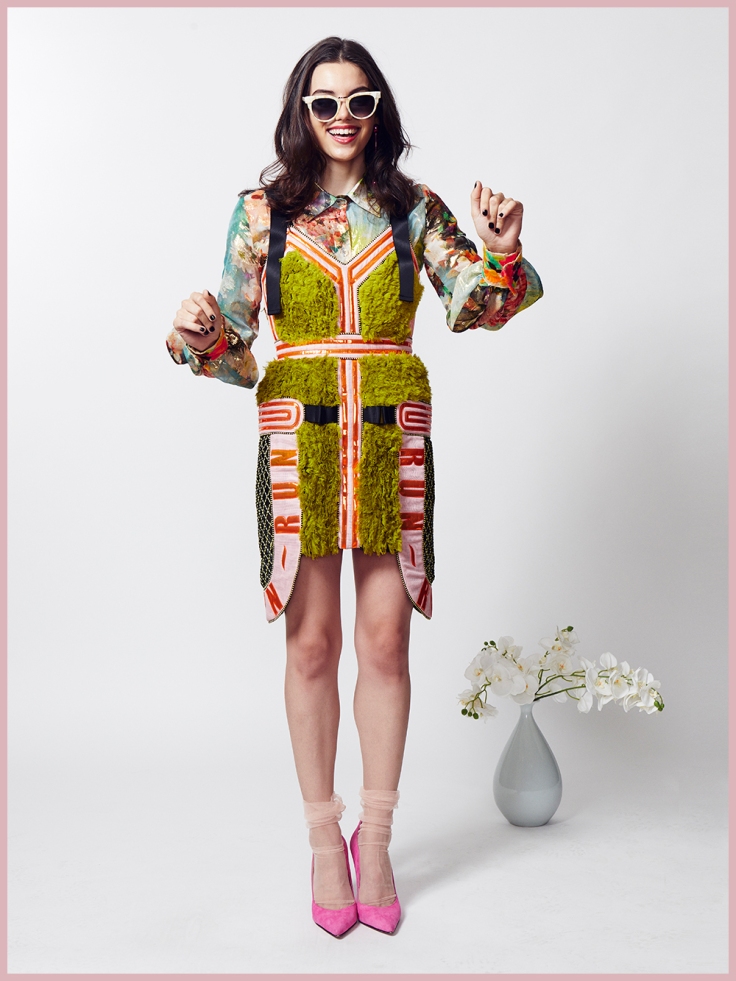 Originally trained as a competitive gymnast, Francesca explains it wasn’t until she got injured that she figured out she could ultimately try her luck in acting. Nevertheless this unexpected event might have been a blessing in disguise for the young woman, as the tide eventually shifted in her favor. While looking for other viable career paths, she ended up auditioning for NYU’s Acting program and relocated to the East Coast to start her new journey in the film industry. ‘‘One of my teachers recommended that I try acting. It has always been a hobby of mine, but never something I thought seriously about as a career. Then I gave it a try and I fell in love with it, and I auditioned to go to NYU.’’

As gracious as she is, Francesca took on her very first big role in 2016 in the Netflix original series Haters Back Off where she played the supporting role of Miranda Sing’s sister, which she recalls in a way as her graduate school experience. ‘‘I really had more of a theater background. I got to learn everything about what it’s like to work on a professional set, because I really didn’t have that much experience working in film up until then,’’ she says. ‘‘I got to learn about working with cameras right up at your face and doing dramatic scenes over and over again. I got to learn about what it’s like to move, and be in a new place where you know nobody, and you don’t know the area. I got to understand what it’s like to make a film with a smaller budget. It wasn’t as glamorous as theater backdrop was, but the people were wonderful and the collaborating team was wonderful.’’

After working for two seasons on Haters Back Off, Francesca soon made her film debut in Karen Maine-directed independent drama Yes, God, Yes where she stars opposite her Stranger Things co-star Natalia Dyer. ‘‘It’s amazing because we did that movie before I even got to audition for Stranger Things, and Natalia and I really clicked very quickly on that set. And it’s not very often that you are on set and you immediately click with one of your castmates. She has become one of my close friends and she was very helpful in the Stranger Things transition for me.’’ The movie was shown at the SXSW Film Festival last March and it even received a special jury prize for best ensemble after its world premiere. ‘‘I’m hoping that people will get to see the movie Yes, God, Yes very soon. I’m hoping that it will find a sort of distribution and people will be able to go out and see it because it’s a truly wonderful movie that talks a lot about sexuality, something that is not really often talked about openly, and I think it’s important.’’

Even though Francesca delivered an outstanding performance to portray Heather’s many faces in the highly-anticipated newest season of Stranger Things, it turns out that she auditioned for Maya Hawke’s role in the first place, before becoming a lifeguard at the Hawkins Community Pool. She reveals she was pleasantly surprised when the creators of the show called her to unveil Heather’s storyline, as sad as it is. ‘‘When I was auditioning, all they got to tell me was that she works at the pool so I honestly just assumed that she would be the character that would occasionally pop up when they were doing something at the pool,’’ Francesca laughs. ‘‘It was very exciting because I got to be two different people. I got to be this regular girl who has a summer job and is completely normal. Then I got to be this inhuman character that was very dark and very creepy. It was very different from any other character I’ve ever gotten to play so it was a good challenge for me as an actor, especially when she becomes a monster which was such a treat because the monster is the main point of the entire show. I got to do a lot of cool stunts in the show on my own so working with the team to create that was really rewarding.‘’

When talking about her very favorite behind-the-scenes moment, Francesca mentions the dinner scene she filmed in episode 3, when Millie Bobby Brown and Sadie’s characters Eleven and Max come to Heather’s house to see if she is alive. ‘‘There is a moment after they leave where we attack my parents and bring them down to the basement. And that whole scene where we are attacking them is one of my favorite behind-the-scenes moments because it took forever. It was just really fun to work with Michael Park who plays my dad, and the physicality of hitting him in the head with a bottle. And to work on that dynamic between the switch of being their daughter and being a monster was the most fun, in my opinion.’’ 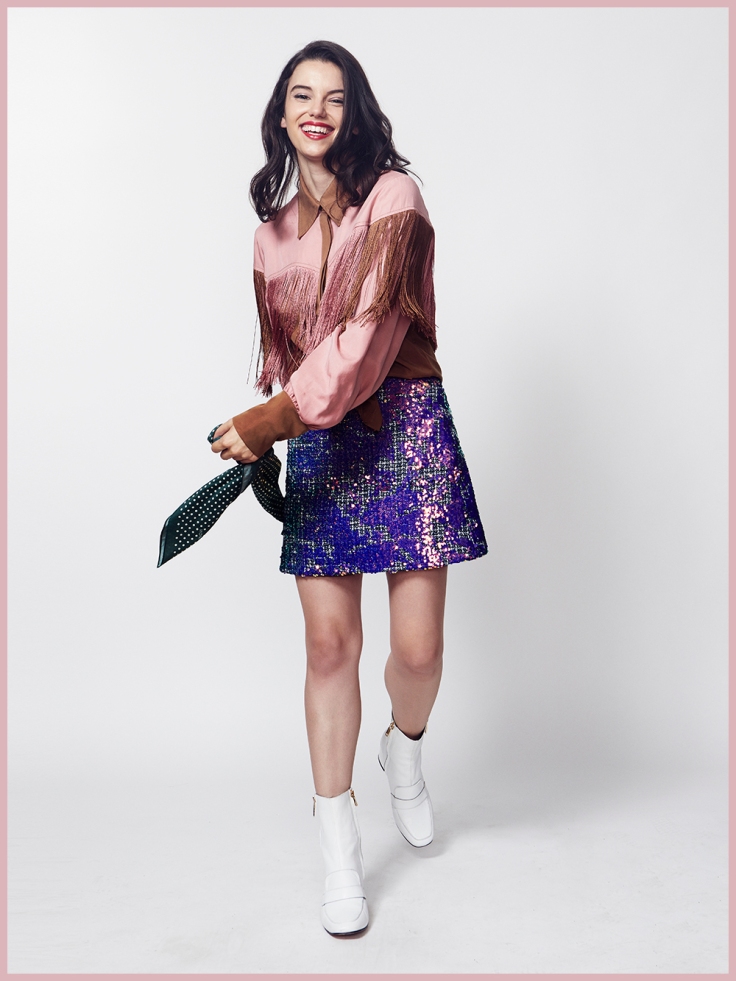 One of the other major elements making Stranger Things as singular is the considerable work done to shape this creepy alternate reality and recreate the atmosphere of the 80s era, from the looks to the cultural references. ‘‘They are dedicated to making the world as realistic and as relatable, but also as incredibly dark and scary as they can to make it as enjoyable for the fans because every season they keep creating something new and better, and more interesting,’’ Francesca expresses. In addition to introducing new characters, the small town of Hawkins inaugurated a new place, the Starcourt Mall, which was actually built inside of a real shopping mall. ‘‘That was an experience. My mom was telling me how she remembers malls popping up everywhere and what that was like for her growing up.’’

When you’re bullying yourself, you just need to look in the mirror and tell yourself that’s mean and it’s not true

Though just like any other actor, Francesca admits she has known ‘‘very down actor moments’’ to get where she is today, but she all the same managed to overcome them by reminding herself she is here for a reason. ‘‘It’s so easy when you are not working to immediately feel very down and let your mind kind of bully you,’’ she says. ‘‘Because when you are an actor, everyone around is going to say mean things about you, they are going to hate your work, they are going to love your work, and it’s easy to brush that off. But the biggest critic is always gonna be yourself and it’s very easy to let yourself get overwhelmed and let your mind tell you things that aren’t true.’’ Quoting a piece of wisdom her agent told her, Francesca adds, ‘‘When you’re bullying yourself, you just need to look in the mirror and tell yourself that’s mean and it’s not true.’’ 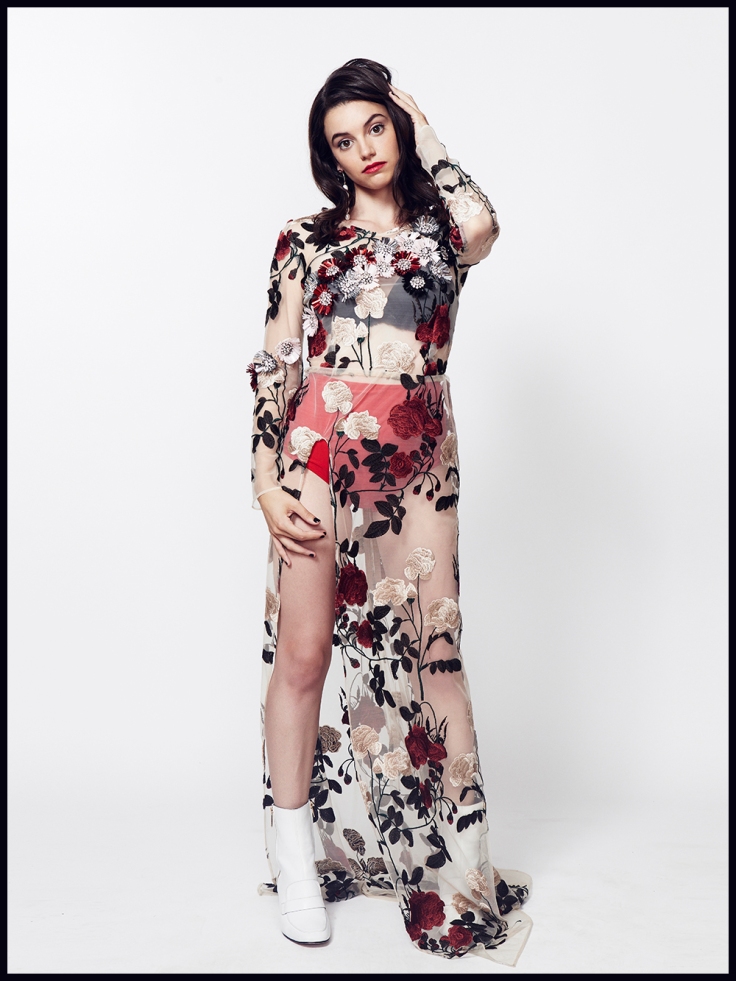 Francesca’s main aim for the next few years is to keep learning how to understand this world of being an actor a little bit more everyday. ‘‘Honestly you just continue to grow each job you get as an actor. You learn more, you learn from the people you are working with and the circumstances you are working within,’’ she claims. When thinking about the final message she would like to share, she pauses for a moment and then adds, ‘‘I hope everyone loves Heather and continues to watch Stranger Things, and rewatch it, and be kind to yourself. I guess it would be a nice message to end this.’’