If you have been following Netflix’s 13 Reasons Why for 3 seasons now, you must be pretty familiar with Timothy Granaderos. Since 2017, the 33 year-old actor has been gracing our screens with his performance as one of the many multi-layered characters on the show, Montgomery De La Cruz. With his genuine kindness and good mood, he caught up with us over the phone to tell us everything about his journey. 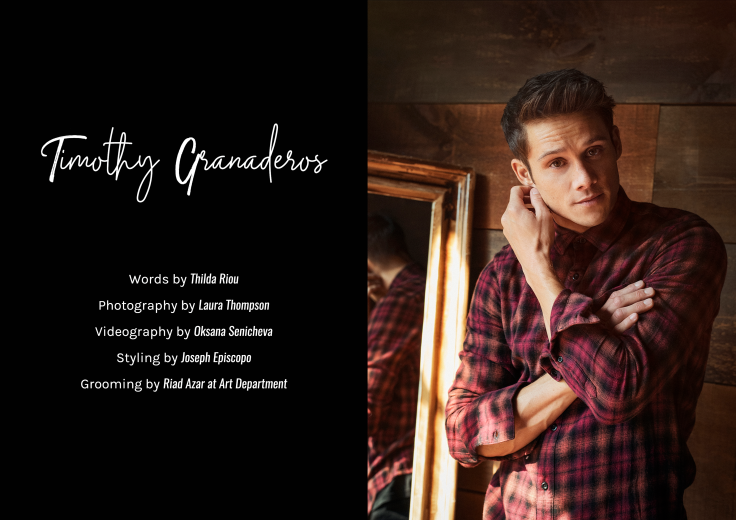 Born and raised in Michigan, Timothy didn’t grow up surrounded by the entertainment industry. However, he believes that his curiosity in acting started indirectly in elementary school, as he loved making people laugh. “I was kind of a goofball! I’ve always been like that,” he amusingly recalls. Channeling all that energy into soccer all the way through college, Timothy didn’t approach acting before he graduated. “It kind of came around at the exact right time. It filled that void that I’d lost not playing soccer.” It was only two weeks after graduation when the actor packed his bags and moved to Los Angeles, with the help of his sister — a makeup artist in the industry — ­­­who got him a job on a reality show. After modeling a little bit and playing in some commercials, Timothy started taking acting classes and fell in love with it. “I remember doing my first monologue and feeling the thrill and high of performing and getting that reaction from an audience.” 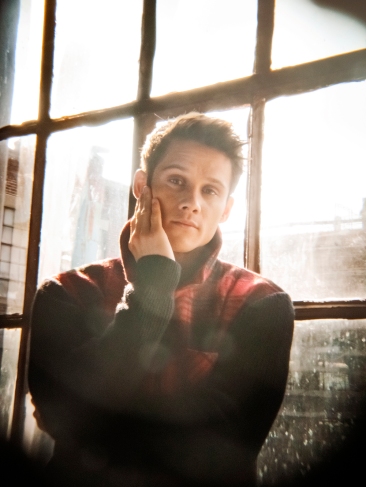 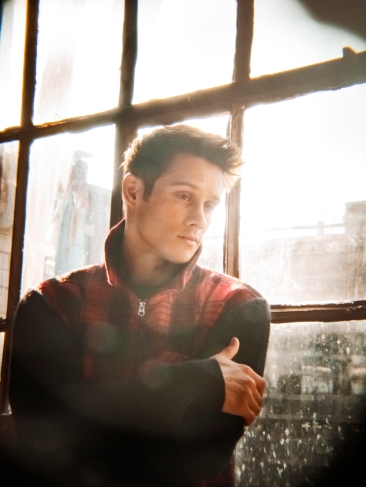 Although everybody who watches the critically acclaimed drama series 13 Reasons Why immediately associates Timothy with his character on the show, the actor actually auditioned for a few other roles, including Justin Foley (Brandon Flynn) and Alex Standall (Miles Heizer), before landing the part of Montgomery De La Cruz. “When they sent me one last tape for Monty, I was so discouraged that I almost didn’t tape it. Luckily I taped it with my buddy who’s not an actor, we sent it out and a week later I got the call,” he explains.

I was excited just to humanize him a little bit, because up until that point he had just become a villain

Monty is a teenager the actor describes as “misunderstood” and “angsty,” who “often takes his anger out in aggression.” As the character’s importance in the storyline increases throughout the episodes, he finds himself in the center of season 2 finale, as he sexually assaults Tyler Down (Devin Druid). “We were actually in Bryce’s back-house. He put me aside and put his hand on my shoulder,” Timothy says on how showrunner Brian Yorkey announced the scene to him. “Obviously when you hear something of that magnitude it’s a little jarring but it made sense for where the story was gonna go, and it gave me something very challenging to work on. So, I smiled and nodded.” 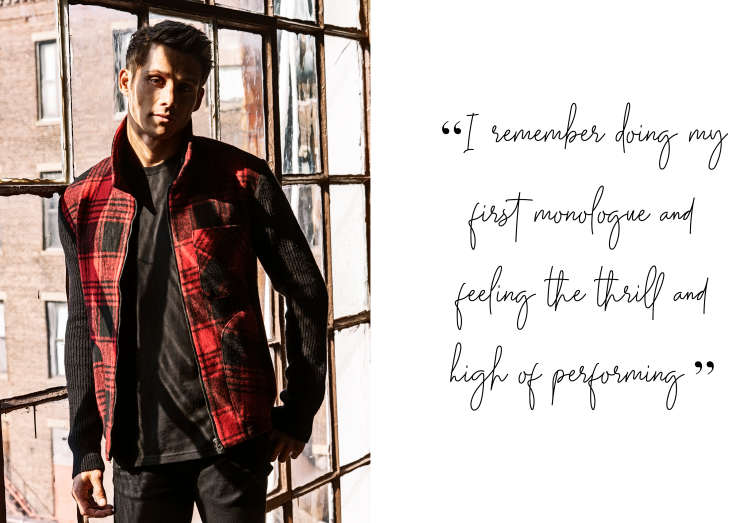 “The show always makes sure we are telling an honest and realistic story,” Timothy states while being asked about how he prepared to shoot this difficult scene. “From the get-go, you feel very safe and supported.” Personally, the actor has the habit to make music playlists to get himself in the right mindset before shooting. “So you just go in there, you do the work, and then you try to leave it behind you, which can be challenging sometimes.” In season 3, the audience got to learn a little more about Monty’s personal life and background, including his homosexuality. “Honestly, it just made a lot of things click for me,” the actor reveals on finding out his character was going to explore his sexuality. “It kind of gave me a reason for being so aggressive and emotionally misunderstood.” In addition to that, we can see Monty’s vulnerability showing out as he begins to build a relationship with Winston William (Deaken Bluman), his love interest on the show. “I was excited just to humanize him a little bit, because up until that point he had just become a villain, until those scenes with Winston I think.”

While the show is always full of surprises, the fans eventually learned Monty’s death in season 3 finale. Even though the event isn’t shown on screen, it is revealed that he was killed in his jail cell, after getting arrested for the assault of Tyler Down. “It’s such a tragic end to a sad story,” Timothy says. “He was all alone. He didn’t have Bryce, he didn’t have the team, at that point he didn’t even have Winston or his family. He was very isolated and alone, which is a bad place to be.” For 3 years now, Timothy has successfully been portraying Monty with raw honesty, and putting all his energy into his performance. “When you put the clothes on, when you do the hair, when you look over and see the others, it’s like a second nature,” he explains. “Monty is so far from who I am as an individual, so it’s like finding a way to relate to him on the most fundamental human level.” 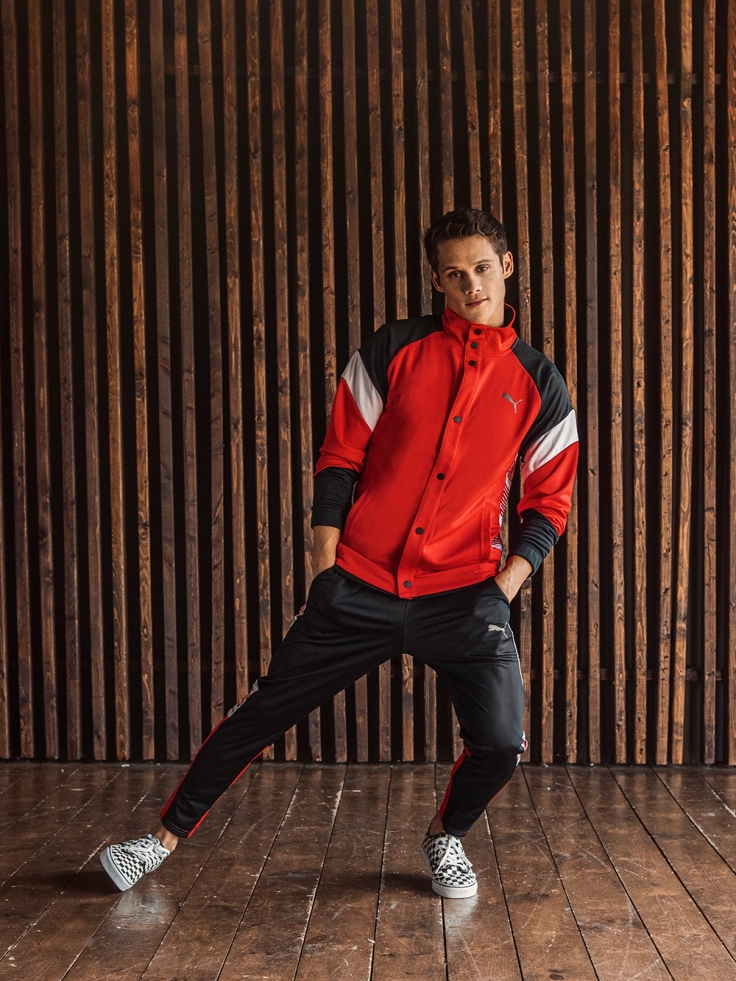 However, playing such a difficult character can sometimes result in negative comments from the audience, who tends to fail to separate the actor from the character. “I know the fans are really passionate about the show, and they love the storyline, the characters and the relationships. But it’s essential to keep in mind that we are just actors,” Timothy states. To a certain extent, he believes that the visceral reactions he gets are ultimately a reminder that he is doing his job in the right way. Looking towards the future, the actor lets us know that he would love to star in an indie film. “Not just any indie film, but something that really speaks to me,” he adds. Although there are so many actors he would love to work with, he admits that one of his dream collaboration would be with Matt Damon, being himself a big fan of his craft. 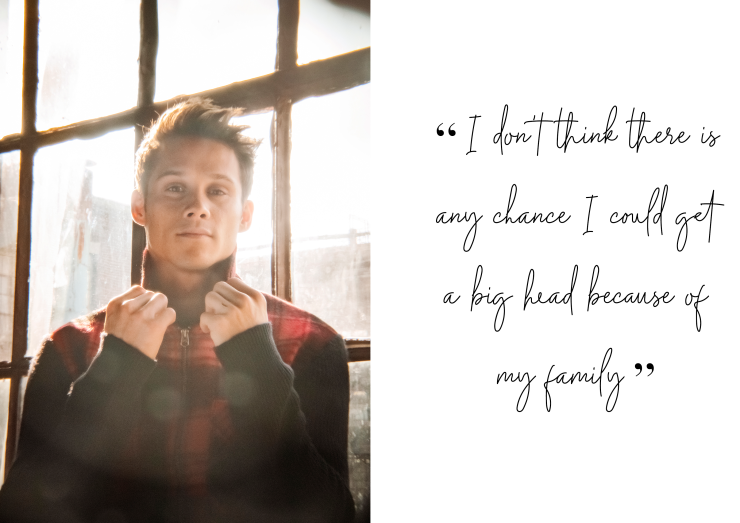 The actor can always count on his family, friends and girlfriend to push him and motivate him to keep moving forward in this field. “I don’t think there is any chance I could get a big head because of my family,” he tells. “I want to represent my family name, I want to do right for them.” When it comes to staying confident, Timothy mentions any daily reminder that he is moving in the right direction. “It can be as big as booking a role or as small as getting up and going to the gym in the morning, just to keep my mental state good.” To conclude our chat, he shares one last message with us. “Spread love. Smile, hug, open the door for someone. It’s so easy but it keeps the love spinning.”