Emmy Raver-Lampman and Genesis Rodriguez have a post-Umbrella Academy catch-up and open up about their effortless friendship. Click HERE to order your exclusive solo print booklet featuring one talent and 20+ pages of INTERVIEW and PHOTOS, or head over to ISSUU to flip through this story digitally 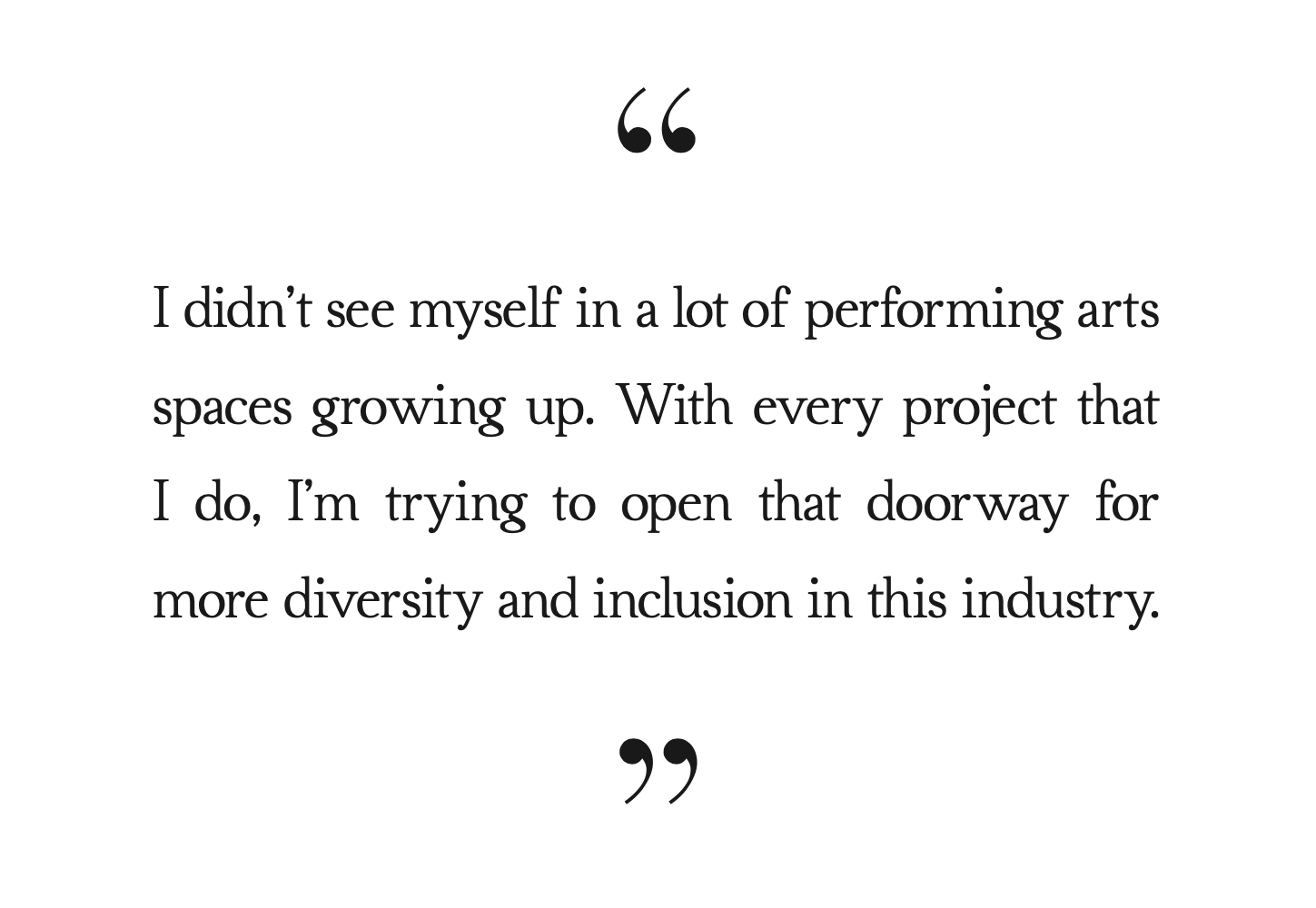 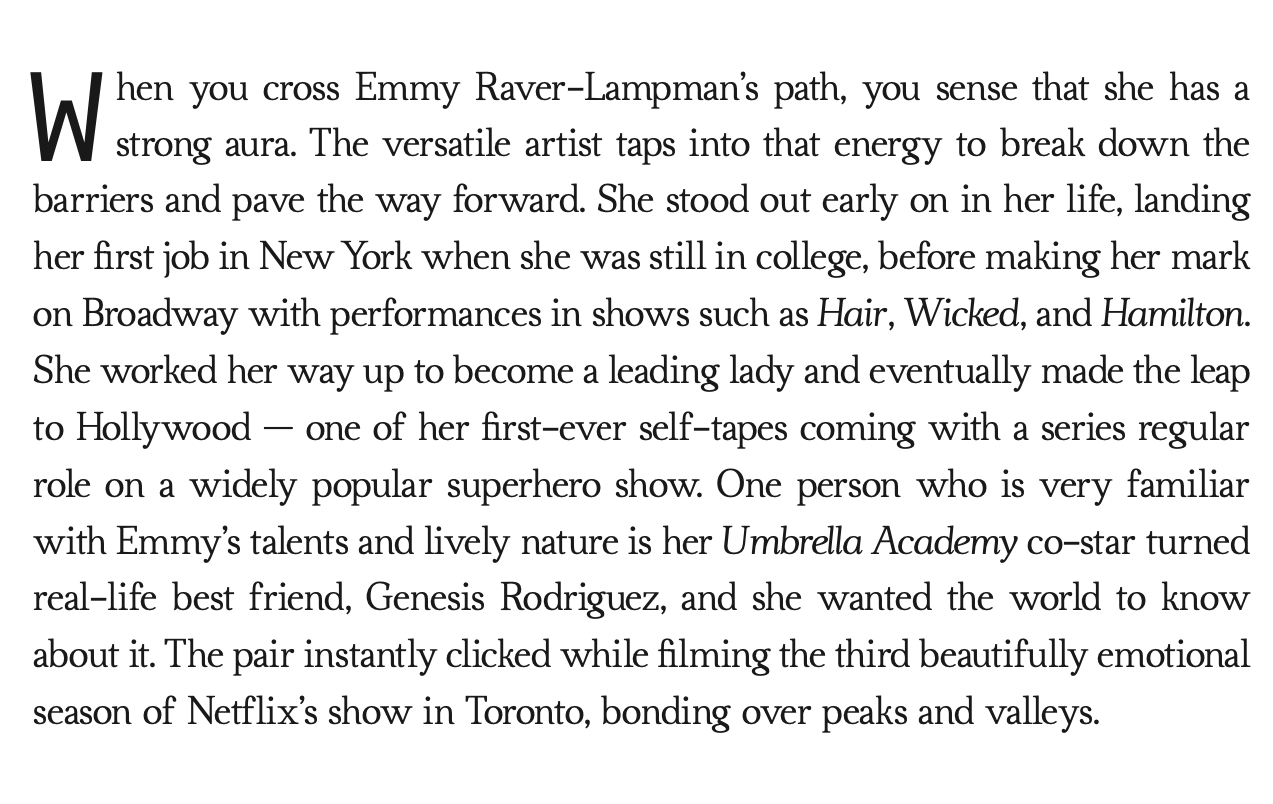 This interview has been edited and condensed for clarity. Check out some extracts below.

GENESIS RODRIGUEZ: My babes! First off, why did you choose me to interview you?

EMMY RAVER-LAMPMAN: You are one of my best friends, so that was an excuse to force you to get on a Zoom with me [laughs]. You and I met for the first time at the beginning of season three when we were up in Toronto doing Zoom dance rehearsals for the iconic “Footloose” dance sequence. Then, we were inseparable.

GR: We just met each other and it happened.

ERL: And we bonded over the fact that our significant others were both away and working in Vancouver. Filming at the height of Covid was really hard and Canada had closed its provincial borders at the time.

GR: I know. I can say that I could have not gotten through that season without you.

ERL: If we weren’t working, we were hanging out, just sitting on each other’s couches and doing the most mundane things. After spending so much time in isolation, it felt nice to be with someone.

GR: People can never imagine how amazing you are as a person. I’m so honored to have you as a friend. But you are also an incredible actor. I love your talent and you inspire me. Let us begin. Do you like it?

ERL: It’s a lot of compliments, so keep going [laughs].

GR: What is your origin story as an artist and when did you get that bug?

ERL: I was a really active child — I was on seven different sports teams, I was a girl scout, and I was always the ringleader of all the kids in the neighborhood. And I grew up in a very musical house. When I wouldn’t get out of bed, my dad would go downstairs and start playing music. Every time my parents would have a dinner party or friends over, I’d get up on the coffee table in the living room at some point and start putting on a show. I got to the point where my parents were like, “Maybe we should get this kid in theater.” My music teacher in elementary school told them that I was potentially musically inclined, so they put me in a family theater group called the Hurrah Players in North Virginia. Then, when it was time to start applying for colleges, I knew I had to go to New York City. I feel like that was the moment my mom regretted putting me in theater, when she realized I wanted to go to a really expensive private college on the Upper East Side [laughs].

ERL: I’m grateful to have the most supportive parents and I wouldn’t be where I am today without them.

GR: They are amazing and I love them.

ERL: They love you [laughs]. I wasn’t able to go to our Umbrella season three premiere, but my parents did and they were live texting me, “Genesis’s just arrived, she is so pretty and so good in the show.” GR: You studied in New York. How was that?

ERL: It was amazing. After going to a performing arts high school, I wanted to go to a liberal arts college where I was allowed to audition and grow relationships outside of school. Marymount Manhattan College was the perfect place to foster that. I took a year and a half off of school in my sophomore year — we did a musical called Bright Lights, Big City [directed by] Tom Wojtunik who told me he was directing a production of Children of Eden. I got the role of Eve & Mama Noah and spent this amazing summer working in Queens. And the choreographer of that, Christine O’Grady, was the associate choreographer for the Broadway production of Hair with Gavin Creel and Caissie Levy. She said, “It’s going on tour, you should audition for it.” I was like, “I don’t know, I’m in school, I can’t really leave.” And she was like, “Wasn’t it why you came to school in New York and you picked Marymount?” So, I ended up getting my first national tour experience. Because of that show, I got my Equity card and it went back to Broadway, so I got my Broadway debut all in one job.

ERL: That was one of the biggest learning experiences for me.

GR: I bet that starting off so young helped.

ERL: I was running around on stage all night singing, dancing, and playing a dirty hippie, but then, during the day, I was taking my insanely hard biology, science, and chemistry classes, writing these ridiculous 12-page papers on HIV, AIDS, and other deadly viruses. It was nuts.

GR: From here, what was your next big job?

ERL: When I went back to school, we had an audition prep masterclass with Broadway director Jeff Calhoun. After class, he approached me and said, “We have final callbacks tomorrow for Jekyll & Hyde and we are looking for one more ensemble member that would also be Deborah [Cox]’s understudy.” That night, I was given four songs and all these scenes to do, and I went to the final callbacks, having to act opposite Constantine [Maroulis]. It was essentially a chemistry read with all new material less than 24 hours later. I stayed up all night and ended up booking that. I graduated knowing that I had a job which was insane. Then, I went on tour with Wicked — I was the Elphaba standby for a year and a half which was incredible because that role is so iconic. When the tour closed, I went back to New York and was looking for the next job. My agents called me one day and talked about Hamilton [by Lin-Manuel Miranda] that was down at the Public [Theater]. They thought it would be a great opportunity for me. When they explained it was a rap/hip-hop opera about the first Secretary of the Treasury, I was like, “That’s the worst idea I’ve ever heard. I’m not auditioning for that.” [Laughs] An hour later, they were like, “You have to audition for this.”

The Umbrella Academy IS NOW streaming on Netflix