This feature is taken from Grumpy Magazine’s ISSUE NO.17, available soon in digital and print worldwide

With her charismatic aura and captivating on-screen presence, British actress Sophie Cookson succeeds in stealing the show in every project she has worked on so far. We witnessed her rise with her big screen debut in spy comedy film Kingsman: The Secret Service, her spellbinding performance in Netflix’s psychological thriller Gypsy opposite Naomi Watts, and most recently, the praise she has received for BBC’s mini-series The Trial of Christine Keeler as the titular character. Eager to gravitate towards projects that she finds creatively stimulating, Sophie starred with Mark Wahlberg in Paramount’s Infinite, in which she drove a car through a wall, among other gripping action-packed things. 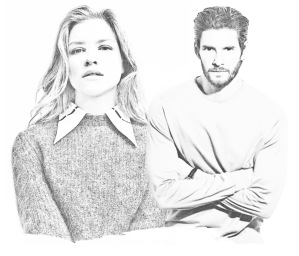 Sophie Cookson and Ben Barnes crossed paths over 20 years ago in London while doing National Youth Music Theatre. Driven by their mutual interest in performing, they have been close friends ever since. In an introspective Zoom call connecting London to Los Angeles, the two actors reunited to take us back to the experience that first brought them together, and to discuss, among other things, their views of being an actor now after spending several years in the industry, and the highs and lows of pursuing such a daunting path.

SIGN UP TO RECEIVE YOUR FREE DIGITAL ISSUE OF GRUMPY MAGAZINE’S UPCOMING ISSUE NO.17 WHEN PURCHASING A PRINT COPY