This feature is taken from our “COLLECTOR” series, full edition available in digital and print worldwide. Get your copy now

She might be just 25, but it’s no surprise that Katherine McNamara feels like she has lived a million lives throughout her career. Unafraid to put herself out of her comfort zone and explore her inner self across all mediums, the versatile actress — who can also sing and dance — has proven her dedication over the past few years by getting involved in multiple and diverse projects. She booked her breakout lead role on fantasy drama and global phenomenon Shadowhunters when she was only 19, then kept finding success by joining the cast of hit superhero series Arrow — all that in a matter of years. As a true “chameleon” that she intends to be, one of her most recent projects led her to take on a darker role as she entered the apocalyptic world of Stephen King in the adaptation of The Stand on CBS All Access.

Kat — as many refer to her — was interviewed by fellow industry friend Zelda Williams on New Year’s Eve. The two of them met at their first Upfronts for Freeform in 2016, when Katherine was promoting the first season of Shadowhunters while Zelda was attending the event for her show Dead of Summer. As a horror movie enthusiast, Zelda directed and produced Kappa Kappa Die in which Katherine made a brief — but memorable — appearance, as she recalled happily that she was shooting Arrow in Vancouver and flew to Los Angeles for a day to get murdered with a Jello shot. Throughout the friendly conversation full of positive energy, Katherine reflected on the hugely different year 2020 has been for her, staying creative and busy during quarantine, and successfully going from hero to villain on-screen.

This interview has been edited and condensed for clarity. This is only an extract.

ZELDA WILLIAMS: I do miss work and I know you do as well. Looking back, is there one role that feels like this defining era for you? There’s like everything that was before this role and then everything that’s come after.

KATHERINE MCNAMARA: I feel like Shadowhunters would be that one for me — not only because of where I was in my career before and after, but also where I was as a human being. I had been working in and out of television and movies for years. Shadowhunters was really the first time that I was at the helm of something. I had a lot of responsibility on my shoulders — not only to the book fans, but the on-set responsibilities of being in that position. I was also 19 years old when I came into the show and I finished it when I was 23. So it really shaped a lot of who I was as an adult, and there was even a period of time as the show was ending that I had to go, ‘‘What is Katherine like as an adult after this show? How do I frame my life now?’’ Because everything in my adult life has been framed around this job.

ZW: Was there a break between when you ended up going to Arrow? Because then you’re coming into a show that has been established for many years. That must have been a very different experience.

KM: It was a hugely different experience, but sort of the biggest gift because there was really no break — maybe a month or two. And I was doing Comic-Cons between the two jobs. But when you come off the job [that has] become such a huge part of your life, there’s a mourning period that happens afterward when you realize that you don’t get to be a part of the story that you’ve been telling anymore. But at the time, I watched six seasons of Arrow in order to figure out how to be the child of these two characters and all of that. It really gave me something to focus on constructively, and not just sit there and look back at Shadowhunters photos.

ZW: With the Arrow universe and the Shadowhunters universe, you obviously played two badasses. I suppose I wouldn’t call Shadowhunters dystopic, but you were certainly dystopic in Arrow. Do you think that’s something that’s going to continue with you? Because it certainly continued with The Stand.

KM: It’s interesting you bring that up because right before Shadowhunters, I had done The Maze Runner, which is another iteration of a dystopian world destroyed by a disease. It’s never something I even considered before. When I started Shadowhunters, I didn’t know how to throw a punch, how to hold a sword. I was really fortunate to have amazing stunt coordinators that trained me five times a week. The folks on Shadowhunters taught me everything I know and I owe them so much because I never thought I could have any modicum of physical strength that was significant given my size. They showed me that no matter what size or shape you are, if you train for your body type and you learn how to do things the proper way, you actually can. It was oddly the moment in the industry as well [of] this resurgence of the strong, developed badass female character. I feel really fortunate to have been a part of that. But moving forward, my favorite part of my job is that I get to be a chameleon and I hope to continue to diversify.

ZW: You don’t want to be a butt-kicker into the infinity and beyond? [Laughs]

KM: I’d be happy to be, but ultimately, I’d love to do other things. On The Stand, I always felt like there was something missing because I had gone from wearing combat boots, jeans, and kicking butt every day to wearing heels, sequins, and not kicking butt every day. I had one day where I had a stunt on set and I went, ‘‘This is what’s been missing. Now, I feel normal.’’ [Laughs] But it’s interesting how different things develop and change.

ZW: [In] The Stand, it genuinely looks like you guys had a blast in the evil Pink Palace. That must have been almost like Halloween for a while.

KM: There’s very much two sides to that with Julie. There’s a side [where] we’re walking through the Pink Palace while they’re playing “Welcome to the Jungle” over the speakers. I don’t know if they’re using that in the show, but that’s what we were playing on set on the day. Or I’m drinking champagne and dancing to whatever music while we’re all pseudo worshipping Alexander Skarsgård — those moments [are] just that weird, silly, fun. But then, there’s the other side to Julie — there’s certain people that she treats with the utmost degradation and disrespect. Those are the moments that were hard for me because I don’t ever want people to think that I’m condoning that or I’m aligning myself with that. In fact, it’s the same way we teach books like To Kill a Mockingbird in school. We have to tell these stories about abominable people so that we show how far things can go when we are not accountable for ourselves and for other people. And the stigmas in our society need to be kept in check. I hope that’s what people take away from that. Don’t be like Julie.

ZW: I haven’t got to see her episode yet. I wish I could ask you more about her, but I’m looking forward to meeting her.

KM: She’s an interesting one. I always think back to when I was in Girl Scouts as a kid and we did this exercise — we had this picture of an outline of a girl and they had us say mean things to it. Every time somebody said something mean, they would rip the picture [again and again]. Then we said something nice and they taped it all back together. Even though this picture had been taped back together, you could still see where all the tears were. That was so indicative to me of how things can still be hurtful, even if you apologize and move on. It’s better to be kind in the first place. That kind of reminds me of Julie and what she goes through.

ZW: I can’t wait to see you with pink hair. It’s wild to me that I haven’t gotten to meet [Julie] yet, but I’m excited to support her.

KM: I forgot to say this earlier, but I always think of her as the intersection of Erin Brockovich, Harley Quinn, Elle Woods, and Villanelle because she’s such a loose cannon with extraordinary taste for extravagance. And yet, she’s a little bit insane. We never really find out if it’s who she was or a product of her environment. But it’s an interesting journey and she’s very unpredictable. She’s the erratic Tinkerbelle of the apocalypse, and I’m very ok with that.

THE STAND IS NOW STREAMING ON CBS ALL ACCESS

20+ pages including an in-depth interview, archives, and exclusive photos 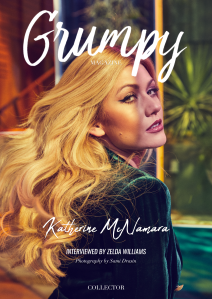