Vancouver native Melissa Roxburgh knew from a young age that she wanted to be an actress. After choosing to pursue band over drama in high school, she was approached by a teacher who convinced her to give acting a try. Years later, Melissa has developed a love for the art and is captivating audiences all around the world.

Growing up, Melissa’s home proved to be a phenomenal place to pursue a career in acting. Following high school graduation, her parents offered her an acting class. This led her to the coach she still works with to this day. After starting her training, Melissa was able to quickly dive into the industry, considering there were so many American productions happening right in her home city of Vancouver. “It felt like I got to cheat a little bit as far as being a part of all these American productions, but being able to stay in my hometown, because a lot of people move to Hollywood right away and they have to leave family or their family has to come with them.” After gaining her footing in the industry, Melissa earned her first major role in the film Diary of a Wimpy Kid: Rodrick Rules and later in Diary of a Wimpy Kid: Dog Days. Since this was one of Melissa’s first experiences acting on screen, she was learning throughout the process of filming. “What I was learning on that project was how to hit a mark, how to not look into the camera, just the basics of being on set.” Despite her lack of previous experience, Melissa recalls the director, David Bowers, and the producers of the film as being very kind and understanding. “They were so patient with me and basically just wanted everyone on set to have fun. I don’t think I could have asked for a better first onset experience.”

Another project Melissa took part in was the Supernatural series, portraying Lila Taylor, the lover of the God Chronos. Later on, she played Violet Duval in a different episode. Melissa went on to play this character in the show’s spinoff, Supernatural: Bloodlines, however, it did not get released. Following these roles, she was cast as the alien officer, Ensign Syl, in Star Trek Beyond. This role, unlike others she had played before, had many aspects that surprised her. “I auditioned for the project, and it was all super hush. No one knew what the character they were auditioning for was.” After the audition process and ultimately getting a part in the film, Melissa showed up to the set where she was greeted with her “crab head” style costume. “I’m just sitting here thinking that I’m going to be in Star Trek Beyond with a crab head! Which ended up being an incredibly cool crab head, the visual effects and makeup artists were so talented.” While shooting this science fiction action film, Melissa had the opportunity to learn from the other actors and actresses on set. “I would say that every single set that I’ve worked on I’ve learned something new, whether it’s on set etiquette, whether it’s how to get in touch with myself in certain different scenes or play with other actors. Honestly, a lot of the actors that I’ve worked with just taught me a lot.”

Outside of acting, she continues to expand her skill set by working towards a degree in communications with a focus in journalism. “The acting industry is so up and down, but it’s always good to have a plan B, so I started going to school because I figured if acting doesn’t work, I want to be able to do something that I’m still passionate about.” Melissa has continued to volunteer throughout her career. As a child, before entering the acting industry, she was a part of her father’s organization Athletes in Action which was a soccer team who traveled the world helping developing countries. Later on, because of her instilled urge to volunteer, she searched for an organization to help, ultimately leading her to the International Rescue Committee (IRC). Through this organization, her contributions helped refugees across the globe. Additionally, she is involved with A21, an organization aimed at stopping human trafficking. Melissa explains that she connected her involvement with this organization to her desire to help women who are highly impacted by sex-trafficking. “I think that women should champion women. I know that the organization itself helps men and women and children, but the human trafficking and the sex industry, for me, really kind of struck a chord.”

Since 2018, Melissa has been best-known for playing Michaela Stone in the NBC series Manifest, which is currently on its second season. Michaela is a detective whose life is completely changed after getting off of flight 828, five years later than she had anticipated. As for how the actress approached portraying this complex character, she honed in on their similarities. “I think Michaela is really close with a lot of ways too. She’s a rebel, she lives in her brother’s shadow, she’s a black sheep in the family.” Another thing Melissa relates to with this character is their processes of growing over time. “I would say that she’s evolved in the sense that she’s just more aware of the mistakes that she’s making. I feel like for me, as a human being, when I evolve in one way, I also find ten more things that I need to work on.”

Another project Melissa starred in recently is the film based on a true story, I Still Believe, opposite KJ Apa and Britt Robertson. In this movie depicting hope through the lens of an emotional story, Melissa is Heather Henning, the older sister to a young woman who is faced with the devastating realities of being diagnosed with ovarian cancer, Melissa Lynn Henning-Camp (Robertson). Being that this was the first time Melissa was acting in a true story, the experience was new to her. “This is the first real person that I’ve played, so I really wanted to do her justice and be respectful of the fact that it was her story.” Going forward in her career, Melissa plans to continue acting and learning along the way. As for what she believes is the key within this industry, she says to be a “well-rounded person”. “The more you fill your own soul with what fuels you, cultivating your own interest outside of acting, you’re going to be able to bring something more to the screen.” 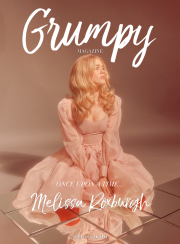